It's simply too difficult to create a list of recordings made by conductor Leonard Bernstein that could be called "The Best of Lenny" or "The Definitive Bernstein List."

For those interested in building their own Best of Lenny collections, here's where to start. In no particular order …

Bernstein leads the Columbia Symphony from the piano for a landmark recording of Rhapsody in Blue. His 1963 reading of Ferde Grofé's Grand Canyon Suite is still considered one of the best.

Bernstein was famous for championing the music of American composers and led the 1951 premiere of the Symphony No. 2 by Charles Ives. The symphony had waited nearly half-a-century to be performed.

Bernstein created some of the most exciting recordings of symphonies by Dmitri Shostakovich. This recording of the Symphony No. 5 was made in 1959 (check out the program from the performance), the same year Bernstein and the New York Philharmonic toured Europe and the Soviet Union during the Cold War.

Shostakovich listened from the audience in Moscow's Tchaikovsky Conservatory Hall, and congratulated Bernstein and the musicians on stage following the performance.

One word of caution: Bernstein puts his singular stamp on the work by taking the finale of the Symphony No. 5 at an unusually blistering pace. It's incredibly exciting but atypical, and as such probably should not be your first experience hearing the work.

The pace taken by conductor Andris Nelsons and the Boston Symphony Orchestra in this recent "live" concert recording is more traditional. Both the Bernstein and the Nelsons recordings are excellent and well-worth hearing!

Watch Bernstein and the London Symphony Orchestra in concert (1967):

The year 1960 was the centenary of Gustav Mahler's birth. To mark the occasion, Bernstein and the New York Philharmonic held a Mahler Festival.

As a champion of Mahler, Bernstein played a pivotal role in the revival of his music. He was the first to record all nine of Mahler's symphonies and conducted them often in concert.

The first televised performance of Mahler's "Resurrection" Symphony was by Bernstein and the New York Philharmonic. The occasion was the day following the assassination of President John F. Kennedy.

Bernstein was also a champion of American classical music. Along with his recordings of the works of Charles Ives, Bernstein is known for his interpretations of Aaron Copland's music, the compositions of Samuel Barber and several other Americans.

After Bernstein stepped down as music director of the New York Philharmonic, he stepped up his involvement with the Vienna Philharmonic.

With that group, he again performed the cycle of Mahler symphonies (all but one recorded on video), as well as symphonic cycles of Beethoven, Brahms and Schumann.

In addition to these recordings of the Schumann Symphonies live in concert, DVD videos are available of the same performances (ArkivMusic, Amazon).

Bernstein with the Vienna Philharmonic, in concert (1984):

In yet another example of Bernstein as champion of the composer is his cycle of the complete symphonies by Jean Sibelius — released during a time when interest in Sibelius' music had begun to fade.

It has long been considered one of the finer Sibelius cycles to be recorded.

Amsterdam's Royal Concertgebouw Orchestra is another post-NY Phil relationship that yielded some fine recordings from Bernstein.

"Bernstein would often simply sit back and listen to the orchestra make music, giving a small cue now and then, but otherwise letting the musicians take center stage. That is exactly what happens in these beautiful, flowing performances whose outstanding quality is their utter naturalness."

There is no surprise that Bernstein, who was so much at home with the music of the Romantic Period, turned in such a stellar performance of Antonin Dvorak's Symphony No. 9.

Dating from 1962, it continues to stand today as the performance by which all other recordings of this masterpiece are measured.

Paavo Järvi is one of several notable alumni who studied with Bernstein at the Los Angeles Philharmonic Institute, a summer training program that ran from 1982 to 1991.

Järvi's readings of the Divertimento, Facsimile and especially the Symphonic Dances from West Side Story capture all the vitality and energy of Bernstein's music.

And the performance of Prelude, Fugue and Riffs, featuring the outstanding clarinetist Sabine Meyer, is fun to compare with Bernstein's own 1966 recording of the work made with Benny Goodman.

Leading up to the 100th anniversary of Leonard Bernstein's birthday on Aug. 25, 2018, Classical 101 is celebrating A Bernstein Summer on air and online. 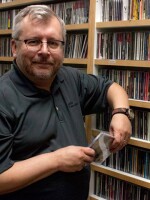 Kent Teeters
Kent Teeters is the Afternoon Host and Music Manager for Classical 101. His work in radio has taken him to stations in Illinois, Louisiana, Indiana, Ohio, California — and once again, back to Ohio.
See stories by Kent Teeters