The third and final presidential debate was last night and central Ohioans gathered across the city at debate watching parties to observe the debate and discuss the issues.

About 70 people gathered at the Buckeye Hall of Fame Caf but they weren't cheering on their favorite football team. This group representing the Ohio Education Association was cheering for Democratic Presidential candidate Barack Obama.

"I think he did very well. He was very presentational and presidential. I thought he said a lot of nice things for the support we need in a classroom to give support for our students."

Sharon Verhoff is a teacher at Chillicothe High School and she supports Obama because she believes he is committed to public schools.

But, heading over to the bar adjacent to the room with the Obama party, Heath Trostle from Cincinnati is in Columbus on business. He is an undecided voter but is focusing more on a baseball playoff game than the presidential debate.

About two blocks away from the Buckeye Hall of Fame Caf , a group of McCain supporters were having a debate watching party in a friend's living room. They are a smaller group of only about 20 people but they're just as excited.

Ohio State University Senior Scott Blake volunteers for the McCain campaign because he believes his candidate will keep our country safe over the next 4 years.

"For me, the number one issue was national security. I really feel as though during the war on terror and in an age of Islamic extremism you need a foreign policy that is aggressive and not willing to wait around with respect to ones security." Says Blake.

But back at the Buckeye Hall of Fame Caf , Obama supporter Nancy Javorek from Chippewa Lake, near Akron sits with a newspaper and pen intently listening to the candidates. She says after making up her mind between McCain and Obama weeks ago she's trying to just have a little fun.

"This was an article in the Cleveland Plain Dealer and it was BINGO for the two candidates, so you cross out the things that they mention. The article said while you're watching the debate play BINGO " Says javorek. 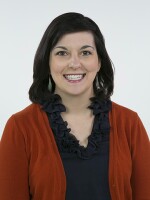 Amy Juravich
Amy Juravich is the Midday Host on 89.7, NPR News and the radio promotions producer for both 89.7 and Classical 101. She also directs 89.7â€™s talk show All Sides with Ann Fisher.
See stories by Amy Juravich