'The Greatest Spectacle In Racing': Indy 500 To Run Without Spectators

Thirty-three teams, 500 miles and a century's worth of history - it's the Indianapolis 500. But this year there won't be any fans in the stands to see what's been called the greatest spectacle in racing. Samantha Horton from Indiana Public Broadcasting reports.

SAMANTHA HORTON, BYLINE: This is what the Indy 500 sounds like on a normal race day.

HORTON: The roar of hundreds of thousands of fans overtaking the sounds of the car engines in the final few laps. But this year's race will sound a little more like this along the 2 1/2 mile track.

HORTON: The race has always taken place in May, but pandemic response bumped it back to August 23. Roger Penske, who bought the track earlier this year, was still hoping to have tens of thousands of race fans in attendance, but that hope faded in June, when race officials announced half attendance then 25% and then no one. It was a decision race officials tried to prevent. Indianapolis Motor Speedway president Doug Boles says a comprehensive health plan was even developed to try to have fans attend the race.

DOUG BOLES: So really, from the moment in March, we knew that we needed to start thinking about what could the Indianapolis 500 look like with a bunch of restrictions in order to make sure that we took care of everyone's health and safety.

HORTON: But even with these precautions, spectators were ruled out.

BOLES: It was a really, really tough decision because we know how important the 500 is to our fans. It's not just a race. It's an entire experience. And a lot of people - it's the one thing they look forward to every year.

HORTON: While the gates may be closed to fans, that didn't stop some from tailgating at the speedway as drivers practice. Standing outside Gate 1, Ed Wenck listens to the cars zip by at over 200 miles per hour. Wenck's attended the Indy 500 for more than 20 years, but his wife is at high risk for COVID-19, so he decided early on they would skip this year's race.

ED WENCK: The last thing in the world I wanted to do was sit in a petri dish like this in the time of pandemic.

HORTON: Like many others, longtime racing fan Nick Holston held onto the hope that he would be able to sit in the stands. The event is a family tradition and a big deal for him. He's attended the race for almost 50 years straight.

NICK HOLSTON: You know, a typical year, we'll have 12 to 16 people stay at our house from, you know, seven or eight different states.

HORTON: Holston still received this year's tickets in the mail but says knowing he won't be able to use them is heartbreaking.

HOLSTON: I'm disappointed. You know, Penske had said they wouldn't run it without fans, so obviously, someone put him in a very bad spot.

HORTON: The garages are buzzing with teams working on the cars, getting ready for another day of practice. Inside the track just outside the garages, IndyCar driver Sage Karam says the race will certainly feel different to them.

HORTON: Teammate J.R. Hildebrand says while it's a disappointment not to have fans at the track, the Indy 500 is essential for some teams' employees.

JR HILDEBRAND: It's a huge industry of people that - if we start not having races, it's not just, you know, IndyCar teams that are going to start having to lay people off. It's this huge network of a surrounding industry that you have a similar problem with.

HORTON: Even though they won't be back at the track, race fans, including Wenck and Holston, will still be watching. Wenck says he already has a plan for race day.

WENCK: But, boy, we will be on the couch. And that first beer will be cracked early on Aug. 23. Believe me.

HORTON: While this year's fans will all have to watch the race from home, track officials are hoping to welcome them back in 2021. For NPR News, I'm Samantha Horton. 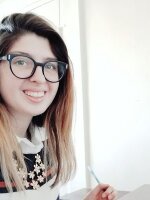 Samantha Horton
Last month, we welcomed Samantha Horton to our station. She is Indiana Public Broadcasting reporter, mainly reporting on business and economic issues in the States of Indiana for WBAA. After graduated from Evansville University with a triple majors degree (International studies, Political science and Communication), Samantha worked for a Public Radio at Evansville for three years, and then she joined WBAA because she wanted to take a bigger role on reporting. So far she enjoyed working in WBAA as business and economy reporter.
See stories by Samantha Horton